It’s hard to believe that Season 3 of Downton Abbey has come to an end so this is our finale post for Books Like Downton Abbey.  And oh my, what did you think of the finale?

Beyond the tears, Mrs. Patmore was simply fabulous in this episode.  Thus, I offer you: 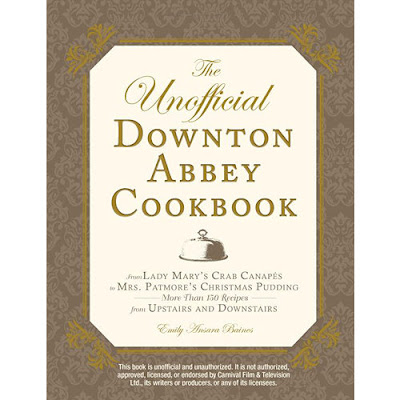 From the publisher, “Nibble on Sybil’s Ginger Nut Biscuits during tea. Treat yourself to Ethel’s Beloved Crepes Suzette. Feast on Mr. Bates’ Chicken and Mushroom Pie with a room full of guests. With this collection of delicacies inspired by Emmy Award-winning series Downton Abbey, you’ll feel as sophisticated and poised as the men and women of Downton when you prepare these upstairs and downstairs favorites. Each dish finds its roots within the kitchen of the grand estate, including:

This book is fabulous.  Part 1 is titled, “Dining with the Crawleys.”Part 2 is titled, “Sustenance for the Staff.”  How can you not love this book!

FW Media provided a review copy of this book.  All opinions are my own.  My opinion is that it is wonderful!

The House of Velvet and Glass by Katherine Howe

This book is set in the same time period as Downton Abbey, right at the sinking of the Titanic.  From the publisher, “an entrancing historical novel set in Boston in 1915, where a young woman stands on the cusp of a new century, torn between loss and love, driven to seek answers in the depths of a crystal ball.”

“Still reeling from the deaths of her mother and sister on the Titanic, Sibyl Allston is living a life of quiet desperation with her taciturn father and scandal-plagued brother in an elegant town house in Boston’s Back Bay. Trapped in a world over which she has no control, Sibyl flees for solace to the parlor of a table-turning medium.”

I read this book in one sitting.  It is simply riveting!

Hyperion Books provided a review copy of this book.  All opinions are my own.

While We Were Watching Downton Abbey by Wendy Wax

Wendy Wax is one of my favorite authors so I was delighted to learn of her new novel.  It comes on out April 2, 2013 and I strongly encourage you to pre-order!

From the publisher, “When the concierge of The Alexander, a historic Atlanta apartment building, invites his fellow residents to join him for weekly screenings of Downton Abbey, four very different people find themselves connecting with the addictive drama, and—even more unexpectedly—with each other… “

This book has everything that Wax does so well- amazing character development, humor and shows the depth of female friendships.  Again, Wax has knocked it out of the park.    And, I must say that Edward the concierge is so like Carson in Downton Abbey.

A few quotes that show why we love Wendy Wax novels:

“The fact that she hadn’t loved the prince at the time he carried her over the threshold of their starter castle was something she tried not to think about.  She’d been trying not to think about it pretty much every day for the last twenty-five years.”

“Cynthia Davis had been horrified when her only son chose to marry the daugher of one-time friends who had disgraced themselves publicly before dying spectacularly.  Samantha’s failure to produce a grandchild had made her even less desirable in her mother-in-law’s eyes.”

Penguin Books provided a review copy of this book.  All opinions and gushing are my own.