Back by very popular demand- Books Like Downton Abbey!  This has been our most popular series- check out the prior posts here.

Downton Abbey  Season 4 starts on January 5th, 2014.  I am excited that Paul Giamatti will join the cast as Cora’s American brother.  And, Shirley MacClaine will return.  I adored it when she sang to Maggie Smith- priceless!

Lucinda  Riley is one of Great Thoughts’ favorite authors.  She and her books are delightful.  Her newest book, The Lavender Garden, is no exception and it “feels” like Downton Abbey. 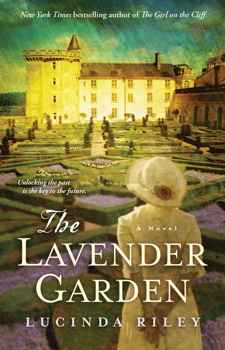 From the publisher, “An aristocratic French family, a legendary château, and buried secrets with the power to destroy two generations torn between duty and desire.

La Côte d’Azur, 1998: In the sun-dappled south of France, Emilie de la Martinières, the last of her gilded line, inherits her childhood home, a magnificent château and vineyard.

Paris, 1944: A bright, young British office clerk, Constance Carruthers, is sent undercover to Paris to be part of Churchill’s Special Operations Executive during the climax of the Nazi occupation. Separated from her contacts in the Resistance, she soon stumbles into the heart of a prominent family who regularly entertain elite members of the German military even as they plot to liberate France. .

As Emilie discovers what really happened to her family during the war and finds a connection to Constance much closer than she suspects, the château itself may provide the clues that unlock the mysteries of her past, present, and future. Here is a dazzling novel of intrigue and passion from one of the world’s most beloved storytellers.”

As with all of Riley’s books, you are drawn into the story immediately and cannot stop reading.   My favorite quotes from the book:

“..but sometimes the badge you’re forced to wear in life does not necessarily indicate the kind of person you are.”

“People say that the death of the older generation means you truly become an adult.  Maybe that’s the prize from the sadness of losing them.”

Simon and Schuster provided a digital review copy of this book.  All opinions are my own.

This book too resembles Downton Abbey and I thoroughly enjoyed it.  Rutherford Park easily could be Downton and Mr. Bradfield, the butler, could easily be Carson.  This is a wonderful read that should be on your Downton Abbey reading list!

“From the publisher, “For the Cavendish family, Rutherford Park is much more than a place to call home. It is a way of life marked by rigid rules and lavish rewards, governed by unspoken desires…

Lady of the house Octavia Cavendish lives like a bird in a gilded cage. With her family’s fortune, her husband, William, has made significant additions to the estate, but he too feels bound—by the obligations of his title as well as his vows. Their son, Harry, is expected to follow in his footsteps, but the boy has dreams of his own, like pursuing the new adventure of aerial flight. Meanwhile, below stairs, a housemaid named Emily holds a secret that could undo the Cavendish name.

On Christmas Eve 1913, Octavia catches a glimpse of her husband in an intimate moment with his beautiful and scandalous distant cousin. She then spies the housemaid Emily out in the snow, walking toward the river, about to make her own secret known to the world. As the clouds of war gather on the horizon, an epic tale of longing and betrayal is about to unfold at Rutherford Park…

Penguin Group provided a review copy of this book. All opinions are my own.

Ok, now that you have read this far, you deserve a treat- Shirley singing to Maggie, courtesy of PBS- Enjoy!

3 comments on “Books Like Downton Abbey- The Summer Edition”