OUTSTANDING!   The Husband’s Secret by Liane Moriarty ranks up there with Gone Girl and Reconstructing Amelia.  Moriarty’s writing, however, is far superior to those books.  This book is fantastic and should be read at once. For some crazy reason, the book is only $5.99 for Kindle right now so I encourage you to download immediately.

This book was an Amazon Book of the Month in August with this review. “Liane Moriary is probably doomed to be forever labeled a writer of “chick lit.” But despite its dopey name, her new novel, The Husband’s Secret, is better described as a comedy of manners and one with a serious undertone. As in her previous books, most successfully What Alice Forgot, Moriarty here wittily and observantly chronicles the life of middle aged, middle class Australian women, suburbanites who grapple with prosaic issues like marital fidelity and torturous ones like moral guilt and responsibility. You can’t help but laugh along with the small observations–“And there was poor little Rob, a teenage boy clumsily trying to make everything right, all false smiles and cheery lies. No wonder he became a real estate agent.” But it’s the big ones–Can good people do very, very bad things, and what, exactly, are we responsible for, and for how long?–that will make you think. This is a deceptively rich novel that transcends its era and place at the same time that it celebrates same. —Sara Nelson“ 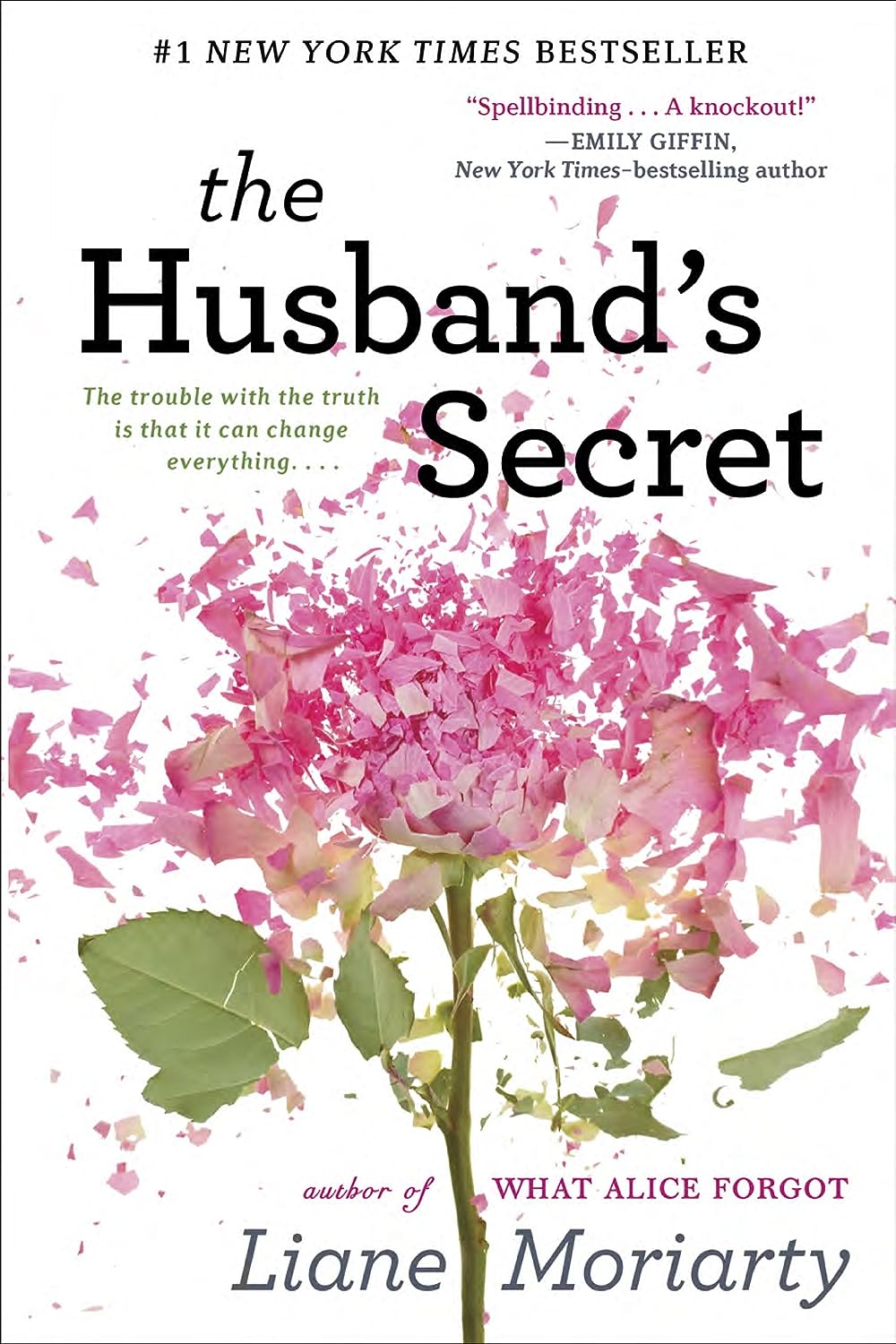 Quotes from The Husband’s Secret by Liane Moriarty

I highlighted over 30 quotes from this book.  The writing is simply superb.  Here are a few gems:

“She had forgotten this: the way your senses exploded and your pulse raced, as if you were properly awake after a long sleep. She had forgotten the thrill, the desire, the melting sensation. “
“.. they were suddenly doing that crazy, tear-each-other’s-clothes-off, banging-into-walls thing that you never do once you’re in a long-term relationship because it seems too theatrical and not really worth the bother anyway, especially if there’s something good on TV.”
“All these years there had been a Tupperware container of bad language sitting off to the side in her head, and now she’d opened it and all those crisp, crunchy words were lovely and fresh, ready to be used.“
“If only she could have e-mailed or texted him, that would have solved everything, but mobile phones and the Internet were still in the future.”

“This was how it could be done. This was how you lived with a terrible secret. You just did it. You pretended everything was fine. You ignored the deep, cramplike pain in your stomach. You somehow anesthetized yourself so that nothing felt that bad, but nothing felt that good either. Yesterday, she’d thrown up in the gutter and cried in the pantry, but this morning she’d woken up at six a.m. and made two lasagnas to go into the freezer, ready for Easter Sunday, and ironed a basket of clothes, and sent three e-mails inquiring about tennis lessons for Polly, and answered fourteen e-mails about various school matters, and put in her Tupperware order from the party the other night, and put a load of laundry on the line, all before the girls and John-Paul were out of bed. She was back on her skates, twirling expertly about the slippery surface of her life.“
“I’m a child, she thought as she knocked on the door. A middle-aged, perimenopausal child.“

“That was why the sex had been so good with Connor: because they were essentially strangers. It was his otherness. It made everything—their bodies, their personalities, their feelings—seem more sharply defined, and therefore superior. It wasn’t logical, but the better you knew someone, the more blurry they became. The accumulation of facts made them disappear. It was more interesting wondering if someone did or didn’t like country music than knowing one way or the other.”
“They could fall in love with fresh, new people, or they could have the courage and humility to tear off some essential layer of themselves and reveal to each other a whole new level of otherness, a level far beyond what sort of music they liked. It seemed to her everyone had too much self-protective pride to truly strip down to their souls in front of their long-term partners.”

And whatever you do, read the Epilogue at the end last.

Update 10/6/2013- Thanks to USA Today for this article where Liane Moriarty casts the potential movie of The Husband’s Secret.  I love her choices!

3 comments on “The Husband’s Secret by Liane Moriarty”